I was intrigued by the report last weekend in the Sunday Times that two Parisian restaurants are seating diners according to their looks. Café Marly that overlooks the Louvre (below) and Restaurant Georges at the top of the Pompidou Centre have a policy of seating ugly clients out of sight at the back of the dining room, keeping their prestigious window seats for their most attractive patrons. The Sunday Times sent two of their reporters, Alessia Horwich and Chris Halam to see if the policy held true. Alessia was the beauty and Chris the beast and both arrived at the two restaurants in question without a reservation. As it turned out, Alessia got a front row table overlooking the Pyramide at Café Marly and Notre Dame at Restaurant Georges (below). In comparison, Chris, once mistaken for Wayne Rooney, was shown to the furthest backroom seated alongside what he describes as the 'American family from hell' (mom a bit overweight; son bizarrely dressed as Marcel Marceau). 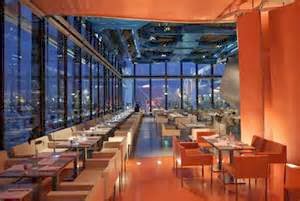 However, the newspaper feature was not quite what it made out to be, as it was not about looks that determined where the maître d' seated restaurant customers, but about style. Alessia, not only had a stylish name and long blonde hair, but was wearing a scarlet dress, black courts and fancy tights with a seam down the back. She had turned on the Parisian style! Chris looked more like a taxi driver - turned-up jeans, black leather jacket, white T shirt under denim shirt and boots. I can imagine any waiter would give him the once over before directing him to a 'former storeroom where 12 troll-like diners were supping in the half-light'. 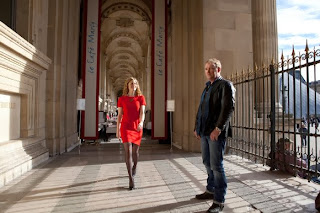 In Paris, it's all about style, as it is Milan, or Madrid. The Parisians have historically had a certain style and put a lot of weight on appearance. Citizens of the French capital are judgemental and in order to be accepted, you need to be stylish, if you're not stylishly dressed then expect Parisians to make faces at you. Chris and Alessia found prestigious tables occupied by handsome young lovers, and photogenic French families. Their clothes were designer, the children angelic and their dogs, if not pretty, had nice collars or were well manicured.

But being 'ugly' doesn't make the menu any cheaper and at 60 Euros per meal you should expect a terrace table, if that's where you want to be seated. If the waiter has other ideas, then there are plenty of other excellent restaurants in Paris, Milan, Madrid or any other European city that will welcome your custom. I take frequent visits to Italian cities and try to make the effort to be 'Italian stylish' when going out to eat. Sadly, I can always recognise the British customers, not only by what they are wearing, but by their 'bum bag'!